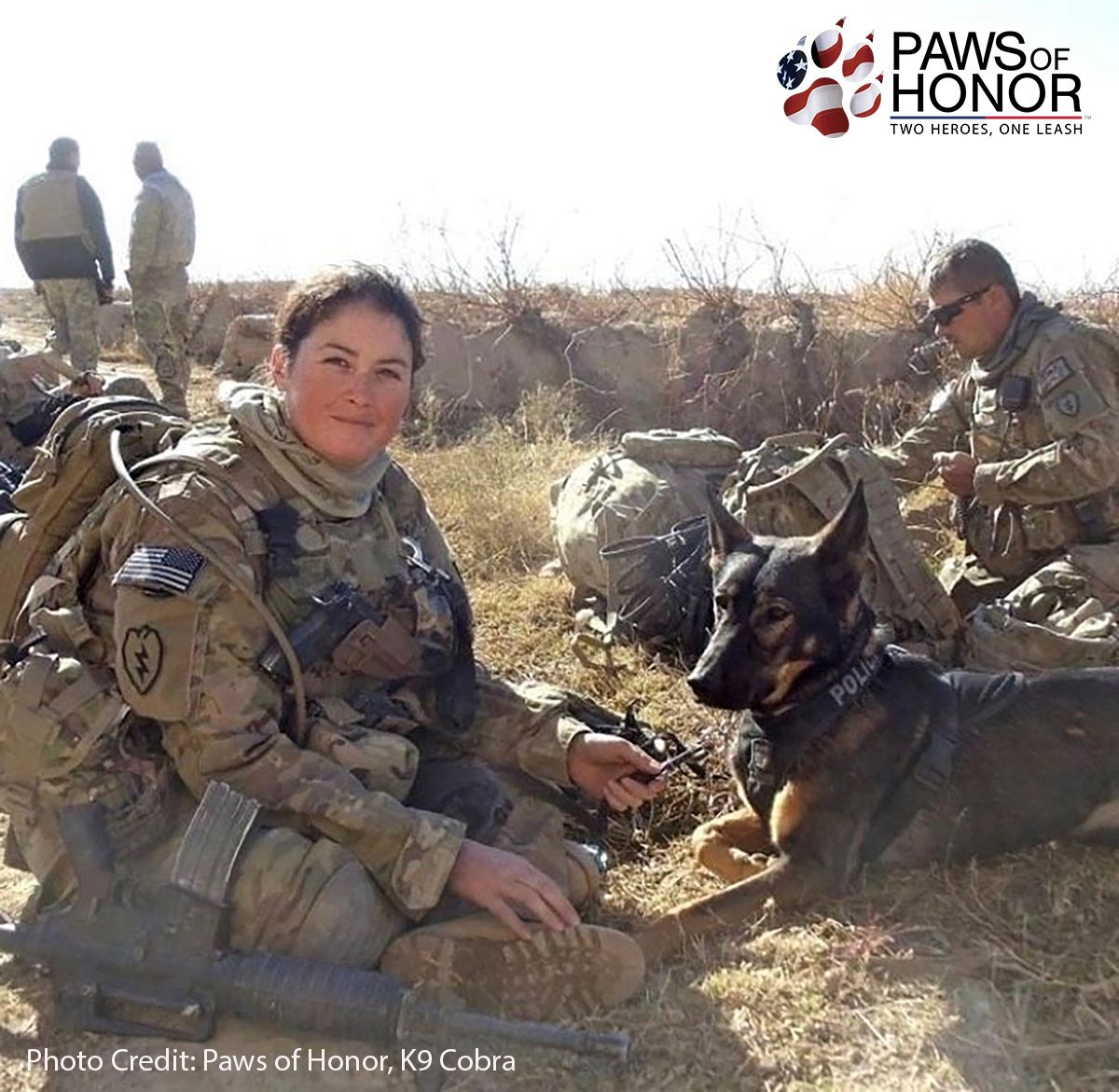 Military Working Dog, K9 Cobra, was assigned to her first and only handler, Ashley S., in July 2009. Cobra worked as a Patrol/Explosive Detection Dog in the United States Navy. In March 2011, Cobra and Ashley deployed to Kandahar, Afghanistan for 10 months. During those 10 months, Cobra and Ashley formed an unbreakable bond.

On November 10, 2011, they loaded up in a Stryker to head to their next mission. About 10 minutes into the trip, they hit a roadside bomb. After the explosion, Cobra and Ashley worked as a team to sweep the Helicopter Landing Zone, so the helicopter could land safely and pick up those that were wounded.

Ashley says, “This was the scariest moment during my deployment. I looked at Cobra and said, this is the moment that if anything is there, we step on it and save everyone.” Thankfully there was nothing more, the helicopter landed, picked up the injured and they made their way back to the Forward Operating Base.

K9 Cobra and Ashley completed many more missions after this, and left Afghanistan in January 2012, uninjured.

Over the next year, both Cobra and Ashley fought with PTSD. Cobra wouldn’t eat unless Ashley fed her. She did not like loud noises, closed spaces, and could not be near people. Most days, her anxiety was through the roof. After trying multiple medications and treatments, Cobra retired in May 2013, at the age of six. Ashley was lucky enough to take her home.

The first year was rough for both Cobra and Ashley, but they were able to get through it together, and grew even closer. In 2014, Ashley had a baby girl and Cobra’s mental health immediately changed. Ashley believes that when her daughter was born, it gave Cobra a job, and with that came less anxiety.

Cobra meant everything to Ashley, so when she noticed an abscess on Cobra’s tail, she knew she had to do something. She says, “Cobra is the best thing that could have ever happened to me, because of her I have been able to have a family, friends and able to get through all of my mental health ups and downs.”

Ashley chose to have the abscess surgically removed. After surgery, the abscess ended up being tested and was a form of cancer! Ashley said, “Thank you to Paws of Honor for all you do because without you, I wouldn’t have been able to afford the surgery she needed! You all really make it easier for the retired working dog community.”

There are retired military and law enforcement K9’s nationwide just like K9 Cobra. The goal of Paws of Honor is to provide veterinary care and products at no charge for these dogs that have served throughout the world. The monetary burden associated with veterinary care should not fall on the shoulders of the officer/handler/owner once the K9 has been decommissioned. They deserve accessible, high quality veterinary care in return for their sacrifice.

Your contribution today could help save the life of a retired K9 that once served our communities and country. Thank you for your support and patronage!